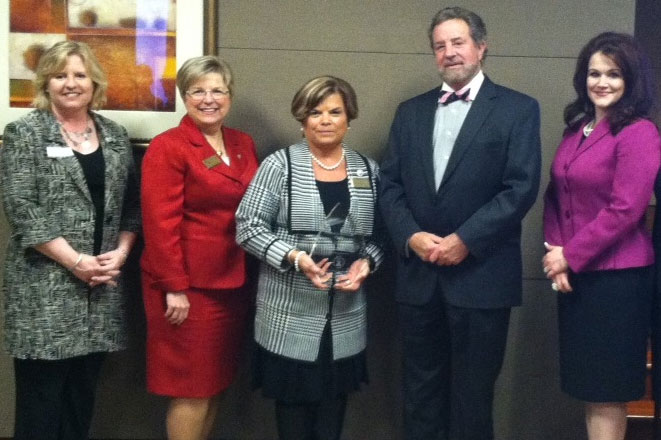 Chief Superior Court Judge Brenda S. Weaver has been honored with the William B. Spann, Jr. Award for creating the Appalachian Family Law Information Center, which serves the citizens of Gilmer, Fannin, and Pickens counties.

The Family Law Information Center (“the Center”) is the first and only kind for rural areas in the State of Georgia. The project was the brainchild of Judge Weaver, who spearheaded its creation in 2008, after seeing that many limited-income individuals could not afford an attorney in divorce and other family cases. Judge Weaver noticed these individuals oftentimes had no understanding of the legal process or the paperwork involved, particularly child support calculations, which as of 2006, involve an Excel Spreadsheet.

Judge Weaver states that before the Center opened in 2008, about 85% of self-represented cases were continued due to incorrect divorce paperwork or incomplete financial information. Judge Weaver learned that some residents had waited 6 to 10 years before they were able to obtain a divorce, and one couple remained separated for 25 years before filing and receiving one. She reports that after the Center was started, self-represented litigants arrive at court better prepared, with the required forms completed and a basic understanding of the legal process. Judge Weaver also emphasized the importance of establishing child support for the benefit of the children: “In this economy, it is extremely important that we move these cases quickly because the custodial parent needs the child support to provide for the basic needs of the child. Continuing the case for another 30 days because of incorrect paperwork causes severe financial problems for families already struggling to pay all of their expenses each month.”

Judge John E. Worcester, who presides over most of the cases originating from the Center, seconds Judge Weaver’s sentiment. He believes that the Center is an effective program for helping eliminate some of the boundaries that people with limited incomes face in accessing the Courts: “It has enabled people who would ordinarily not be able to afford to retain an attorney be able to represent themselves in Court.”

Since the Center was created in 2008, a total of 10,143 individuals from Pickens, Gilmer, and Fannin counties have been helped by the Center. The majority of individuals request assistance with divorce actions (both with and without children), with child custody/visitation modifications next, followed by legitimation, contempt, and name change actions.

The Center has three staff people, all of whom are attorneys and available to assist people with completing forms and to provide legal information. The attorneys do not actually represent individuals in court or give legal advice. The staff travels throughout the courthouses of Fannin, Gilmer, and Pickens, to work around individuals’ work schedules and schedule appointments.

If you are interested in receiving services at the Center, you must be of limited income. To prove you have limited income, you must obtain an application from the Center that contains questions about your finances and answer all questions truthfully. Should you qualify financially for services, the services are provided free-of-charge. If it is determined that you are above the income guidelines and do not qualify for services, packets of information may be purchased from the office of the Clerk of Superior Court or from the Center.

The Center is designed to be of assistance when parties are basically in agreement about what actions they want to take on their family law matters. When the parties cannot agree, the assistance of a private attorney may be needed to resolve issues.

For more information, check out www.appflic.org, which includes downloadable, free-of-charge packets for divorce (both with and without children), contempt, legitimation, child custody and visitation modifications, modification of child support and name changes, and legal information for filing a family law action.

The Center has offices inside the courthouses in each county. It is best to call for an appointment to ensure availability in your area on a certain day. Please contact Hannah Towns, Staff Attorney and Assistant Director, at 706-299-1444 or email her at appfamilylawcenter@yahoo.com.